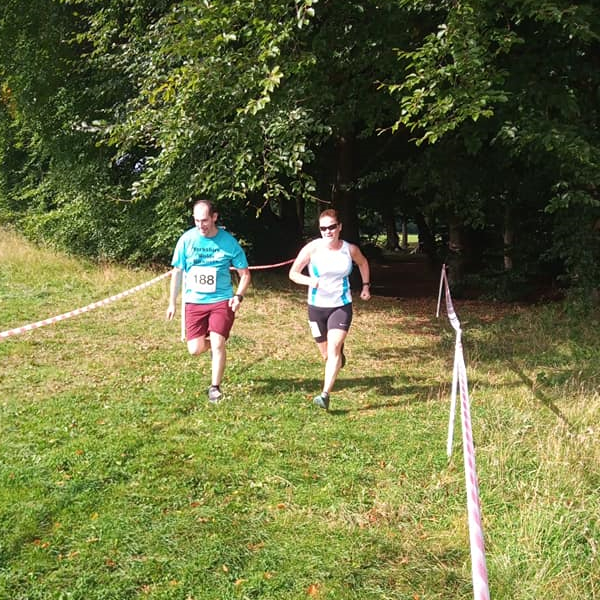 I haven’t done the Forest & Moors 10k before, nor heard much about it.  But the club social team had put this down as one of our events (with picnic afterwards) so we thought it would be a really good one to join in with.

This was our first club event since before Covid.  It is so good to be getting back to some kind of normal, spending time with friends and just being relaxed.

The event is held in the Adderstone Fields area of Dalby Forest, a good 70 mins drive for us.  Plenty of parking, a few loos and a very low key atmosphere.  There weren’t many runners, so even the start line felt very relaxed (though I found myself very near the front!).  I’d had a look online to see if I could find the route, but although I thought I had, I was told it was the wrong one, so had no idea of the route, the elevation, anything.   But in a way I don’t mind that – just set off and see what happens.  Lots of tree roots, uneven ground, weaving through trees.  A little bit of hard tracks, some lovely downhills, and of course uphills.

What I liked about this course is that it was constantly changing – there were no long uphills or downhills, no long straights.  So much so that I completely lost my sense of direction and had no idea where I was going!  Because the field was so small there were even times that I found myself running completely alone, no one in sight either in front or behind, but the route was well marked – no issue about getting lost.

Before we knew it, we were coming to the edge of the wood and fast approaching the finish.  I was pleased with how I’d run, not that it was my fastest time, but that I felt quite strong, particularly on the downhills.  That might sound daft – downhills are easy right?  But I think I’d lost a bit of confidence over the lockdowns with not doing hilly running, and I had struggled a bit on the few downhills I’d been doing.  But on this run I finally felt like it worked well – I was strong and fast downhill, whilst still feeling in control (just need to sort the uphill running now!).

Will I run it again?  I really enjoyed the run, and the fact that the proceeds go to mountain rescue makes it even better, however one thing that puts me off is that there is an error in the published results (a person missing completely) and despite communication with Garmin time, finish photographs and being able to identify the person who finished either side of them, there has been no amendment to the published results, nor indeed any response from the organisers. It makes no difference to prizes etc (they were 15th pos, 3rd in age cat – if the rest of the results are accurate) but it just seems to make it pointless publishing results if they aren’t going to be accurate.