So it is the first weekend of the new year, we’d run parkrun as usual on Saturday morning but wanted to run Sunday too.  I wanted off road, and wanted to be able to take the dogs with us too.  We didn’t want to go far as had lots of other things that needed to be done so the task was on to find a route.

Does anyone else find this difficult? (or is it just me that is so indecisive??!)

We look at numerous routes, but they just don’t seem right, too far away, might be cows, might be other dogs (particularly loose ones), nowhere to park, no tangible reason but it just doesn’t feel right….

But we finally decided to just go 5 minutes up the road in the car, and on to a footpath that runs alongside the river.  I knew it would need to be an out and back route but accepted that this morning as we just needed to get out.  It was already after 11am before we set off. 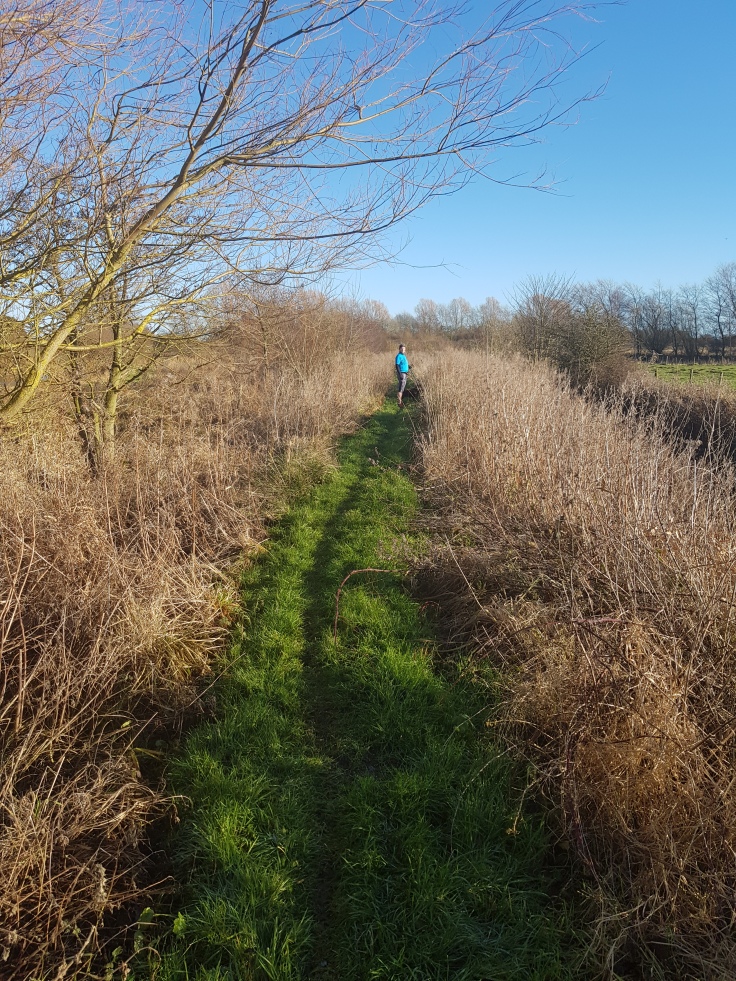 Mud, glorious mud!  Oops, my husband wasn’t overly impressed with my choice of route 😉  but actually it was lovely.  Across a couple of paddocks, and then onto grass paths along the side of the river.  We were lucky enough to see a deer fairly close and stood still whilst it found it’s escape.  The dogs were absolutely wired!  they love being somewhere new, and being able to sniff and explore – and lets face it, these runs are as much about them as they are about us.

We then realised the route went over a stile and along a stretch of very narrow path, covered in briars.  Neither of us had long trousers on.  My husband went first, cursing me every step of the way lol.

Luckily it wasn’t far and we were back on the better grass sections, watching out for swans on the river.  We also saw several herons.

And we lost the path.

We carried on for a bit, but there were no more footpath signs and the route was getting more difficult so the decision was made to turn around.  We’d done a couple of miles by this point, but it was hard going so a good work out.  I ended up ankle deep in mud a few times (thanks for the photos kind husband) and with scratches all down my calves from the briars.  But overall this was a fun Sunday run.

However…  I HATE leaving it to the last minute to plan.  It delayed us setting off and just makes me feel like I’m playing catch up for the rest of the day.  Next Sunday we already have a route planned.  Another off road route of just over 6 miles.  Wish us luck!

Work is getting in the way again this week, I’m currently in Paris for short stop for work, before heading back to London and then back to Yorkshire.  This means I miss Tuesday running club and won’t get to run Wednesday either.  I did run Monday and am planning a Thursday evening run, which added to the weekend means I still get four runs in.  After setting myself the challenge of 1000 miles for the year I really don’t want to get behind already !